After the Fit Flops of Summer are Gone

As much as I love, love, love summer (the beach, the smell of sunblock, the heat's making the consumption of ice cream damn near a necessity), I must acknowledge that there is already a certain crispness in the air, and with the first of the 400 fall holidays already behind us, there is no denying that fall is pulling into the station. And with fall come two lovely, beautiful, wonderful things - outerwear and.... boots. That's right, boots. Boots, boots boots!
Let's say a person has a generous number of boots already, but, let's just say, she doesn't have any casual, to-the-knee, ass-kicking boots. Well, not in brown. And let's say she has assembled an assortment of coupons, rewards cards and Amex gift cards, which when combined would bring the cost of these hypothetical boots down to a mere $10, if that much. Which boots should she buy? Should she buy the lace-up, Lucky pair, that tells her fellow subway riders she is not joking about her strict enforcement of the one-ass-one-seat rule? Or should she buy the pre-distressed, lug-soled Clarks that make a similar statement, but with a hint more granola, but for sure not even a whiff of that acrid patchouli oil? 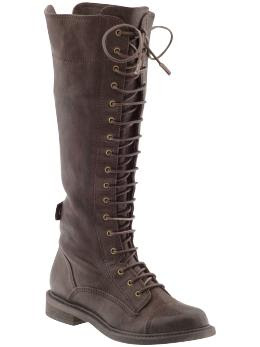 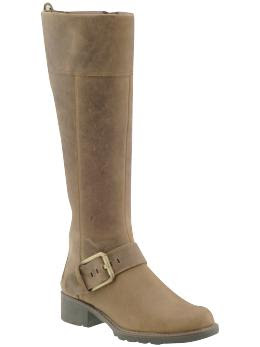